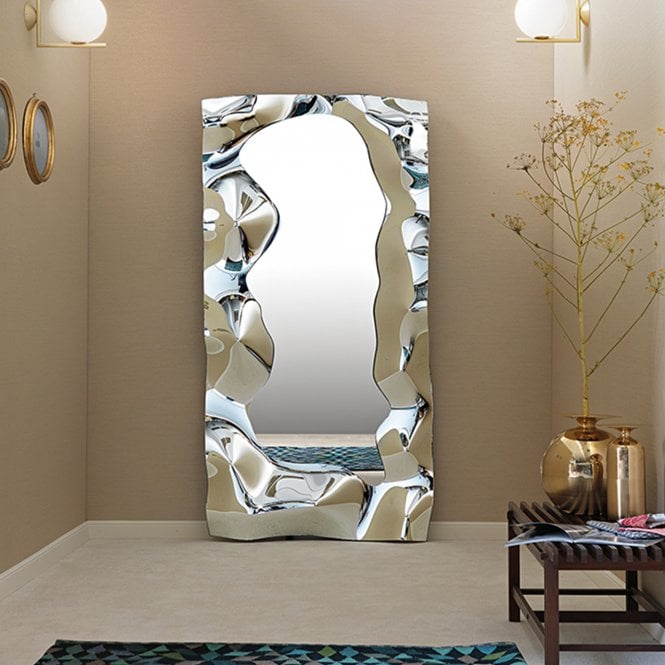 Code: PH-1998Â°
Item in Stock Item out of Stock | Usually dispatched within 24 hours
Loading...
Ask A Question
Email A Friend

This large silver mirror combines the beauty of abstract form and the functionality of flat mirror.

The flat mirrored section is available either running across one half or set centrally. The flat mirror contrasts with the fused, slivered glass backing that runs around the flat mirror to form a rectangular silhouette. The rear mounted metal frame allows this mirror to be wall mounted in various different positions.

Available in 6mm high temperature fused glass, back-silvered. 5mm flat mirror. Rear frame in painted metal. Comes with feet to allow mirror to lean against wall or it can be wall mounted.

FIAM ITALIA was founded in 1973, the first company to produce furnishing items in curved glass. Thanks to its technology and partnerships with top international designers, FIAM has become a leader in this industry and some of its products are on display in twenty-five museums worldwide. After overseeing the restoration of Montegridolfo, a walled town dating back to the 7th century B.C., in 1992 Vittorio Livi (the owner of FIAM) purchased and renovated Villa Miralfiore, a historic building in Pesaro constructed in 1260.

Browse our range of Fiam Italia at Glassdomain.

From the collaboration between the designers Dante Oscar Benini and Luca Gonzo with Helidon Xhixha the FIAM wall mirrors in Christine and Phantom glass were born.

DANTE OSCAR BENINI, after having been a pupil of Scarpa and Niemeyer and having designed and built all over the world, in 1997 he founded the studio Dante O. Benini & Partners Architects, which today leads as a partner leader and chairman together with LUCA GONZO, senior partner and managing director. The areas in which the studio operates through its offices in Milan, London and Istanbul are different: from architectural design to urban planning, from interior architecture to design and nautical design. Over the years the studio has received numerous awards, achieved victories and classifications in international competitions and held seminars and conferences in Italy and abroad.

HELIDON XHIXHA was born in Durres in December 1970. Son of art, he spent his childhood in his father's studio from which he inherited a strong passion for fine arts, but above all for sculpture. While starting to attend the Academy of Fine Arts in Tirana, he decided to move to Italy. In 1998, thanks to a scholarship, he had the opportunity to attend Kingston University in London and thus improve his engraving, sculpture and photography techniques. In February 1999, he graduated from the Brera Academy of Fine Arts in Milan. In a short time he was recognized in the academic field for his style, experimenting and creating works with an innovative technique that uses his favourite material: stainless steel.

Browse our range of Fiam Italia at Glassdomain.