This site uses cookies to provide and improve your shopping experience. By continuing to use this site, you agree to accept these cookies.
For more information, please see our Cookies Page
More Info
Ok
COVID-19 Update | We're Open!
20% OFF 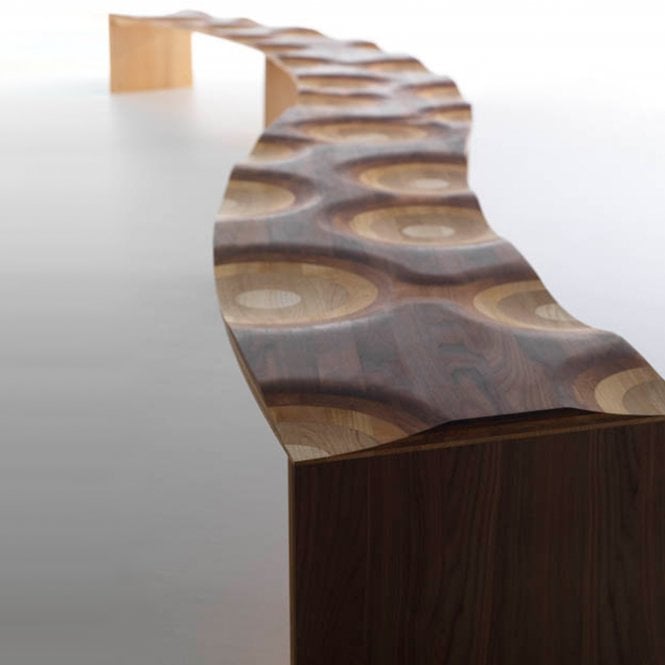 Designed By: Toyo Ito
Code: RIPPLES LIKE A RIVER - B + B (180°)+B
Item in Stock Item out of Stock | Usually dispatched within 24 hours
Loading...
Ask A Question
Email A Friend

Seat made from plywood using five different types of wood (walnut, mahogany, cherry, oak and ash). Inner metal reinforcement. Plywood legs with edging and walnut veneer (on the outside) and birch veneer (on the inside). Lower panel made from birch plywood, hot-press curved and with beech veneer. Vegetable oil finish. Adjustable feet.The concave seats of the benches are polished and finished by hand. For the concentric circles of two adjacent seats to meet perfectly.

HORM, its range of furniture which brings together simplicity, art and innovation. It offers a home environment that is essential yet refined, lending every home an air of uniqueness and exclusivity. The collection's common denominator is the development of products of great character that combine aesthetics, functionality and awe.

TOYO LTO - Born in Japan in 1941, Ito graduated from Tokyo University in 1965. Between 1965 and 1969 he worked at Kiyonori Kikutake Architect and Associates. In 1971 he opened his own studio called Urban Robot (URBOT) in Tokyo, a name that changed in 1979 to Toyo Ito & Associati. Honorary Member of the American Institute of Architects, Member of the Japanese Institute of Architecture and Honorary Professor at the University of North London. His projects are inspired by nature, “by air, water and wind. For him architecture "is not an instrument" but "a meeting place for people's feelings". In forty years of professional activity, he has distinguished himself among the most influential international architects, but he can't be described as a star. At the age of 71, Toyo Ito won the Pritzker Prize, the architecture Nobel Prize awarded by the Hyatt Foundation. In this edition the prize was awarded to Japan. Toyo Ito, master of many other influential oriental architects, began his career with small buildings, houses and pavilions, but then built landmarks in Japan and beyond. He has created dozens of architectures that stand out for their structural lightness and the use of innovative technologies. He signed the project for Tod's in Tokyo, a museum of architecture on the Omishima Island near the Seto Sea and a multifunctional building in Barcelona. In Taiwan, the Dragon Stadium, a solar stadium has been built in Taiwan, which with more than 8,000 photovoltaic panels needs only six minutes of exposure to the sun to feed itself with the energy it needs to "turn on". As a designer, he has relationships with many companies such as Alessi, Electrolux and Horm. Toyo Ito is not the architect who loves spectacularity and has worked a lot on the role of the project for people's quality of life. was particularly committed to post-tsunami reconstruction, also preparing at the last Architecture Biennale in Venice a pavilion dedicated to the home for all, where he also won the Golden Lion. Recognized for having experimented with new possible relationships between the shell and structure, Toyo Ito has tried to merge the organic, natural approach with technological research. Its aim is to make sure that its projects, once they have been built, are contextualized and integrate in the best possible way, also thanks to immaterial and mobile elements. Every time I finish a building - explained Toyo Ito - I feel painfully aware of my inadequacy, a feeling that I try to convert into energy for investment in the next project ". In this sense, "I will never be able to give full meaning to my architectural style, nor be fully satisfied with my works.