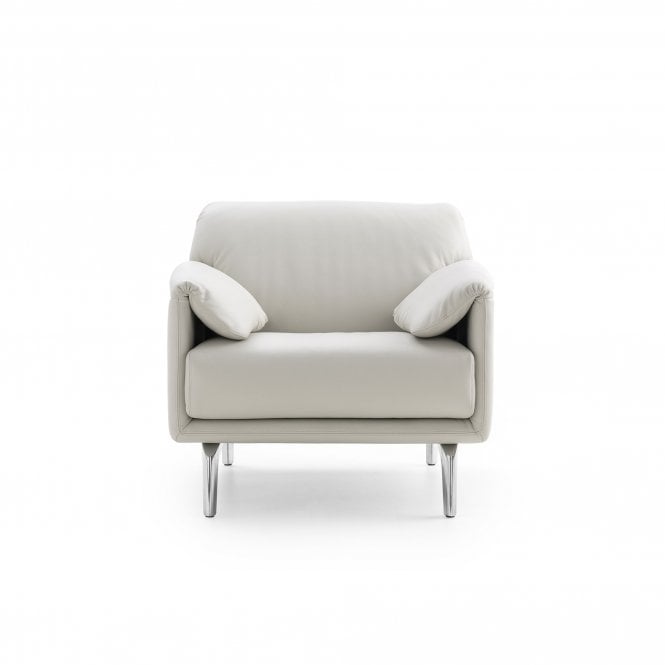 A designer weighs up his ideas, seeks balance. His skill is to reflect the wishes and desires of the consumer in a balanced form. Balanza by Axel Enthoven offers the balance by which you recognise a good design. With a slender frame, elegant aluminium legs and contemporary dimensions . With generous, soft side cushions providing support, a firm seat and a cushioned back for unrivalled comfort. Absolutely perfect.

Those who know immediately recognise that the inspiration for Balanza is derived from the successful Bora series from the 1980s. The basic qualities of comfort and hidden beauty were revisited by Enthoven and adapted to this age. The result was a series of sofas which may remind us of the Leolux “classic”, but which also meet all expectations on their own account. Comfortable and beautiful, completely in balance.

Note: This leather is suitable for intensive use. The high-quality finish ensures that it is additionally protected from external influences, including light, dirt and dust. Senso’s thickness and robust structure give a distinguishing mark to a piece of furniture, something that appeals to lovers of this type of leather.

AXEL ENTHOVEN was born on 16 August 1947 in Antwerp. Following secondary school in Antwerp, he studied Industrial Design at the Academy for Industrial Design in Eindhoven, and went on to qualify at the Japanese design school, the Salesian Technical College in Tokyo. Later he studied engineering in Cleveland, Ohio. Practical work placements were undertaken in Germany, Poland and The Netherlands and he also contributed to the Apollo project in the United States. Since 1970, he has worked as an independent designer, becoming visiting professor in 1972 at the Product Development Department of the National Higher Institute for Architecture and Urbanism in Antwerp (later the “Henri van de Velde Institute,” and now “Artesis-college”). In 1976, he founded an independent agency, the firm Idea NV (Industrial Design Enthoven Axel). In January 1990, Idea changed its name into “Enthoven Associates Design Consultants”, a partnership. Increasingly, though, Enthoven Associates has grown into an independent agency dealing with product development and innovative research in many different areas of industry. Conception, development and follow-up of a design study are amongst their activities.To date, more than 1,900 products have been designed by Enthoven Associates, ranging from medical equipment to furniture to bus-tram-train design. Enthoven Associates has performed industrial design activities in the EU, USA, Canada, Japan, Korea, Thailand, Malaysia, Brazil and Mexico.