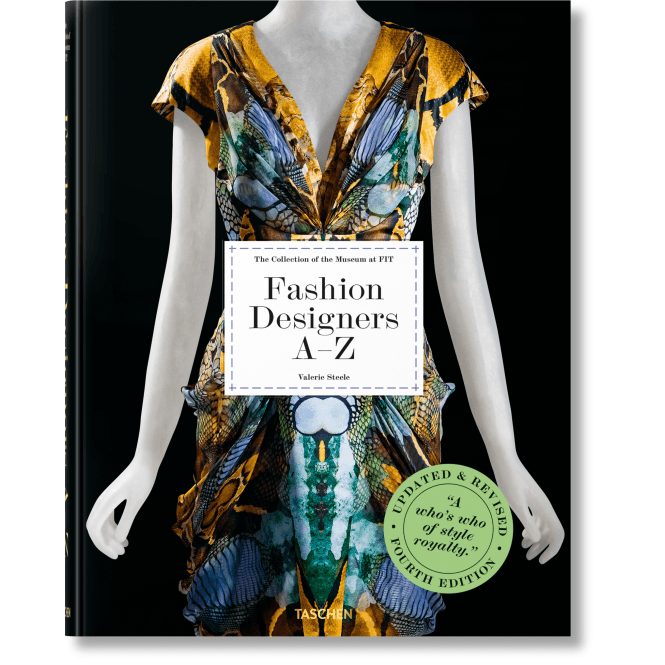 Defining design of the 20th and 21st centuries

From Azzedine Alaïa, Cristóbal Balenciaga, and Coco Chanel to Alexander McQueen, Yves Saint Laurent, and Vivienne Westwood, more than a century’s worth of fashion greats from the permanent collection of The Museum at FIT in New York City are celebrated in this fresh edition of Fashion Designers A–Z.

15 new names join the ranks of the industry’s most admired—Phoebe Philo, Patrick Kelly, and Sonia Rykiel, to name a few—in this updated and expanded release showcasing some 500 garments in the Museum’s permanent collection. From an exquisitely embroidered velvet evening gown to Mondrian-influenced minimalist chic, each piece has been selected and photographed not only for its beauty, but for its representative value, distilling the unique philosophy and aesthetics of each of the featured designers.

In her introductory essay, the Museum’s director and chief curator Valerie Steele writes about the rise of the fashion museum, and the emergence of the fashion exhibition as a popular and controversial phenomenon. International style authority Suzy Menkes contributes a foreword, texts by the museum’s curators shine historical light on each label and garment pictured, and 125 drawn portraits by artist Robert Nippoldt pay homage to the creators behind them.

Valerie Steele is director and chief curator of The Museum at FIT and founding editor of Fashion Theory. Described in The Washington Post as one of “fashion’s brainiest women” and by Suzy Menkes as “the Freud of fashion,” Steele combines serious scholarship (and a Yale Ph.D.) with a rare ability to communicate with general audiences. As author, curator, editor, and public intellectual, Steele has been instrumental in creating the modern field of fashion studies.

Colleen Hill is curator of costume and accessories at The Museum at FIT. She has curated more than a dozen exhibitions, including Paris Refashioned, 1957-1968 and Fairy Tale Fashion, authored or co-authored six books on fashion, and contributed to numerous other publications.

Unquestionably a leader in the global fashion press, Suzy Menkes is International Vogue Editor at Condé Nast International. Her work appears on the websites of 23 international editions of Vogue in 16 languages. She is also a leading Instagram influencer. Among the world’s most influential fashion critics, she is an officer of the Order of the British Empire as well as a chevalier of the Légion d’Honneur. She lives and works in London and Paris. @SuzyMenkesVogue

Robert Nippoldt is a German graphic designer, illustrator, and book artist. He is best known for his award-winning books Gangster, Jazz and Hollywood about America in the 1920s and 1930s. His studio is located at the very hip old depot of Muenster